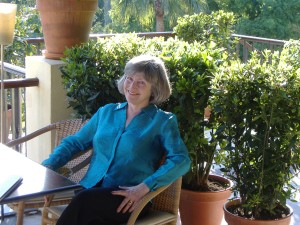 Christine Ward – and husband Barry’s tribute to her and their 43 year long love affair.

This week we’re delighted to have welcome Barry Ward as our guest blogger. By sharing the eulogy he gave for his wife Christine at her funeral, he hopes to help anyone else faced with writing a eulogy for their partner. Here’s his story…

I’d like to take advantage of your web site offer to post a story, in this case  about my dear wife Christine,  who died from the after-effects of chemo in January after treatment for a brain tumour. She was a remarkable lady who achieved great things in life and more than 150 friends and colleagues attended her funeral service at which I gave the eulogy. This is what I would like to publish, if I may.

As a professional writer I think it  may provide a few hints for mourners in a similar situation, perhaps act as an example of what might be said in tribute to the departed.

It is sad, of course, but it contains some humour and gives an insight into both her life and our marriage,which was a 43 year-long love affair.

Eulogy given at the service at Peterborough Crematorium for Christine Ward, of Oakham, Rutland,  who died in Addenbrookes Hospital, Cambridge on 18 January 2015.

Written and spoken by her husband Barry. (We’ve added in headings to give a sense of the structure that you might follow if you are writing a eulogy.)

On behalf of the family I would like to thank you all for being here today, to share our final moments with Christine, my darling wife.

It is a reflection of her standing and her character that so many people have made long journeys to be here, to honour and say farewell to a vibrant and remarkable lady. It is also a measure of her loveable traits that so many of you were her loyal friends for more than 50 years, enjoying constant friendships that spanned the globe as well as the decades. At least three of them have told me that “Chrissy was my best friend….”

Her loyalty was matched only by her unstinting consideration for others. Generous almost to a fault, Christine was loved by all who knew her well.

In my view, kindness is the anchor for all the other commendable human traits, and she was without doubt the kindest person I have ever known. She was, quite simply, a beautiful human being in every sense of the phrase.

She didn’t merely gather friends, she hoarded them, as she hoarded most things that came her way. Her contacts book was a virtual international telephone directory. Her wardrobe required a tour guide and was contained only when mine was despatched to the nether regions. The garden shed was inaccessible for normal use because it was packed with boxes of comics and children’s books and other memorabilia from the days of our sons’ infancy. Some of her possessions dated to her early teenaged years….

The date became an anniversary because it was love at first sight. From that moment on we were never apart; we were inseparable, and married in the following July. It was more than a marriage: it was a romance that lasted for 43 years.

Christine was a forthright girl and not afraid to speak her mind, frequently with me, so we had the occasional spats, as do most couples. But they were the glue that held our love affair together. Because making up afterwards was always a joyous occasion. Sometimes I feel the spats were contrived to this end.

We shared a wonderful journey through life, full of fun and laughter and adventure as we travelled the world together while I followed my calling as a writer. In between all of this she found the time, with a little assistance, to produce two fine sons, Dominic and Jonathan, the source of immense pride for both of us.

She also created a succession of happy homes around England as I followed my quest for journalistic advancement after our return from Sydney. This exercise proved once again that her good taste and sense of elegant style were the equal of her culinary expertise and smiling disposition.

In addition to all this were her other talents. Christine was a superb horsewoman who could ride like the wind; she was a gifted watercolour artist and had considerable knowledge of gardening, opera and other music, one of our mutual loves.

On the full final day of her life she was at last conscious after weeks of heavy sedation and she appeared to be winning the battle for life. Such things are encouraged in intensive care and so I played for her a CD of her favourite pieces by Mozart. She couldn’t speak because of a tracheotomy tube in her throat, but when the disc ended she smiled, slowly raised her arms and applauded. Then the nurses applauded her bravery; at that moment she was my heroine.

Quite honestly, I don’t know how or why I deserved her. Finding Christine was the luckiest day of my life.

Via Worthing and Southport we moved to Oakham eight years ago and here she gathered yet another multitude of loving friends, her workmates at the county council and the needy ex-servicemen, the frail and lonely elderly and the under-privileged, all the folk she helped in her new post as the council’s Financial Benefits officer.

It was a position tailor-made for her expert knowledge,  acquired in a similar post in her home town of Southport, of the convoluted government systems upon which many such people depend for their financial existence and quality of life. Christine delighted in unravelling the red tape and overcoming the hurdles that often denied them their due.

And when she reached the age of retirement she promptly became a volunteer, as Project Development Officer, for the Rutland Community Spirit charity organisation and also for the Royal Air Force Association, of which she was the Honorary Welfare Officer for Rutland.

Her retirement years frequently brought 40 hour weeks, much of it unpaid work driven by her compassion and inordinate generosity of spirit. She touched the lives of hundreds of people. She became their heroine. One war-time ex-fighter pilot called her his guardian angel.

The girl was simply unstoppable.

Until, that is, the evil affliction identified last April took its toll on Jan 18. After such an exemplary life she, above all, deserved much better than the end she met.

But I mustn’t be bitter, simply grateful that I shared her life and that she loved me, passionately and unconditionally, as I loved her in return.

What memories she has left me…

I discovered a notebook the other day in which she had written a verse by Emmerson that so beautifully encapsulates her life. It read:

“Do not go where the path may lead; go instead where there is no path and leave a trail.”

It could not have been more apposite.

A volunteer colleague wrote in her card to me: “Christine has enriched my life, just as she did for all she met….” Another colleague, her manager, wrote a few days ago: “This comes with so much love, Barry. I don’t need to tell you how precious Christine was to me, because she was like that to so many people.”

Those sentiments come as no surprise to me and they bring a modicum of comfort.

But now Christine, my darling wife, has gone, her long and incomparable journey has ended.    She departed this life much too soon, leaving a multitude of broken hearts in her wake, not least all the good folk gathered here today.

We all cherished her as she passed through our lives, dispensing joy and kindness down the years with her consummate grace. We were lucky to have known her, I more than the rest.

We loved you well, my dear one. Farewell until we meet again…

Lovely, Barry, thanks for sharing.

Add thoughts and ideas for words or music to your Funeral Wishes. Tell your story to make it easy for someone else to retell one day. Leave notes, photos and memories in your Memory Box.

2 thoughts on “Writing a eulogy for Christine”