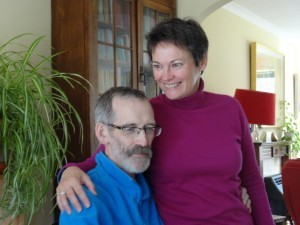 When a partner dies: how the shock of death turned into something entirely different

This is an excerpt from the journal I was keeping for the whole time from when my husband was diagnosed with cancer, through to his death and beyond.

Despite knowing it was going to happen, and that I was there with him when he died, it was still a huge shock.

When the diagnosis happened, I turned to my journal big time. In there, I wrote and raged about what was happening. Outwardly, I got on with my life.

The stomach cancer diagnosis meant it was advised that Philip had a course of chemo, then an operation, then more chemo. At that stage, the prognosis was quite good – if he had a successful operation (ie all the cancer was removed) he would stand a good chance of living another 20 years or so. Despite the odds being against this, we focused on that.

But the operation wasn’t successful. They couldn’t get all the cancer out.

Death loomed much nearer now, and much larger.

Our friend Barbara in Los Angeles emailed, insisting we answer some questions before Philip died. Eventually, one day, we did.   (The next piece is an excerpt from my book Gifted By Grief: A True Story of Cancer, Loss and Rebirth):

I pestered Philip about the list of questions one Saturday morning.

“Come on, we’re going to do The List properly now.” He was still reluctant, but, lying in bed, with me and the laptop next to him, he didn’t have a chance. “It’s going to make a huge difference to me in the future, darling, and besides, Barbara will just nag us if we don’t.”

“Yeah, all right then.” He sounded glum.

Poor Philip – for a man afraid of dying, this was an amazing act of courage, another step in the acceptance of what was happening. We began at the beginning, and continued on until the end, referring to it later as our final project together. In those two hours, I asked him the questions, and he gave me his answers. There were all kinds of questions, from the most basic such as “What kind of coffin do you want?” to which he replied, “Any old box will do,” to more sensitive ones, such as “Are there any of your personal items you would like to leave to anyone in particular?”. This one we discussed in much more detail. It was tough; these are difficult questions to ask of somebody who knows he is going to be dying sooner than later. Feeling a great sense of achievement afterwards, we were very close, connected and loving for the rest of that weekend. Who would have thought that? It ended up being a couple of hours of slightly macabre enjoyment.

Those answered questions were a godsend to me after he died.

I simply didn’t know that grief would render me incapable of lucid decision making, clarity of thought, not to mention interrupted sleep patterns and therefore operating out of sheer exhaustion. In the face of this kind of impact, not having to make decisions about what he would have wanted was a huge gift.

However, as time went on, I really did begin to notice more and more gifts. Eventually, these made their way into my book , Gifted By Grief: A True Story of Cancer, Loss and Rebirth. When this came out in September 2015, many readers found it incredibly illuminating and inspiring. But the thing that most commented on was something I would never have guessed they would like the best.

And what they were inspired by was the fact we had actually answered them, and written those answers down. Because, despite the fact they thought it was a good idea, they were not doing it. Despite the fact that they knew how important it was, how good it would be for their family and other loved ones after they died, it still wasn’t getting done.

I realized I could facilitate that. I did a whole lot more research, added some more questions to the existing list, and hosted a live workshop locally to help people get their own answers written down. It sold out, with a long waiting list.

I offered another one. It sold out too.

I was bringing together my many years of training and practice as a psychotherapist and group leader, with my coaching skills and research into dying, death and grief.

Now I offer face to face groups, online groups and private coaching sessions, all devised to get these questions answered. See my website for more.

If you’ve ever thought ‘this is a good idea’ (which you probably have otherwise you wouldn’t be on the Final Fling website) but you haven’t yet managed to make the decisions, get everything written down, or put in place the legal stuff, then you can do this in the support of a group and with me guiding you.

I’m hosting a free webinar about this on 4th April 5-6pm: 5 Things To Do Right Now That Will Save Your Family Headache and Heartache After You Die. See more on Final Fling’s Events page.

Sign up even if you can’t make the actual call – that way you’ll get a copy of the recording.

You’ll also get an opportunity to join me on an online course beginning 11th April, so you can complete your set of questions or start using Final Fling’s Life Planning Tools from the comfort of your own home.

Or – advance notice – I will be offering a workshop enabling you to start/continue/complete getting your questions done on 9th May in Glasgow, alongside Barbara Chalmers, all as part of Dying Awareness Week.