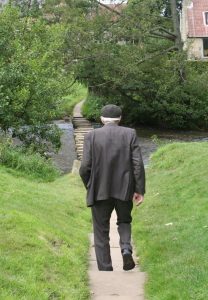 This week, we look at the challenge of facing death and letting go, thanks to Evelyn Temple who shares her thoughtful, poignant story of her dad’s end of life wish – Just Let Me Go.

February 25 2017 marked ten years since my Dad died. My Dad – strong, humble, constant, hardworking. He was my rock and my only parent for as long as I can remember. My mother died on Friday 13 January 1961, when I was five.

The picture is my Dad walking towards the stepping stones at Lealholm in the North Yorkshire Moors. He used to tell us the story of how he almost drowned as a small child when he tried to run across them in the flooded river, slipped and was swept away down stream. He was saved by a low hanging branch and the resourcefulness of his friend who raced along the bank after him and raised the alarm.

It was a Tuesday when my Dad found out he’d got bone cancer. He was in hospital because his arm had broken. The doctors asked him about his resuscitation wishes… he said: ‘just let me go.’ He died the following Sunday aged 81. I’m certain he made a conscious decision to die and thankfully they did ‘let him go.’

I feel that we’re not very good at death and letting go. We often keep people who are clearly at the end of life alive for a few m
ore  days/weeks/months seemingly at any cost. I don’t think we should be killing people but I do think we could ‘let them go’.

Dad’s funeral was on St David’s Day – appropriate for him. He was called David. 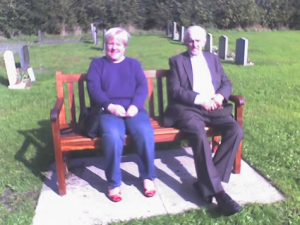 We had this photo on display as everyone walked out of the village church where he wanted his funeral ceremony to be.

We had talked about his funeral – he said he ‘didn’t care for cremation’ and thought he’d ‘better go through the church’. I was very glad we had talked about it because I would have had his body cremated with a civil ceremony and his ashes interred with my mother.

There’s a sense of peace knowing that the decision we made was the right one for him.

I had a very strange experience the day after his funeral. I remember kneeling at his freshly filled in grave to replant a cluster of flowering snowdrop bulbs and feeling an incredible sense of utter serenity – oneness – peace. In that long single moment of solitude, I felt that everything was ‘just right’: the sky was so blue, the birds were singing particularly melodically. Nothing really mattered. All manner of things were well. I can only describe it as ‘completeness’ and I felt that he would slowly and gently seep back into the earth and that would be well too. I have never felt such peace before or since but I hope that at the moment of my own death, I can let go too.

There are often times when I miss him – still. Celebrating my son’s wedding. Attending my uncle’s 90th birthday, which made me selfishly sad that he was alive and my Dad was not. Going on holiday to Kenya and seeing the Rift Valley and the simple farming way of life made me wish I could tell him all about it and show him the photos I’d taken. (His one regret was that he hadn’t travelled much.) Not being able to introduce my grandsons to him, for them to hear his enthusiasm for birds and gardening and learn to dig up and cook new potatoes straight from his garden. I used to think if there was a nuclear war, I could always go ‘home’ and we could live safely with my Dad – irrational maybe, but an indication of the childlike security I felt knowing he was alive in the world.

It hit me last week that I have been an orphan for ten years. I’m 61, a wife, a mother of three and grandmother of four, but I still miss my Dad. When he died it created a totally unexpected and seismic shift in my world. I miss my Dad’s physical presence. Not just in my life, but in the world. Knowing that he no longer takes up a living presence somewhere in a particular space and time disturbs my equilibrium… though not his.

“when for the last time
you close your mouth
your words and soul
will belong to the world of
no place no time”
RUMI, ghazal number 911

Last week I found some old videos I’d taken the year before he died. He had taken to walking round his local church graveyard every day, noting the position of social strata even in death  – ‘Tory Corner up there’ or ‘farmworkers down here’. I realised that I have a video of him standing on what would be his own grave as he describes how a local young man met an untimely end. He didn’t believe in headstones, but he did buy a bench for the graveyard before he died, saying: ‘it could do wi’ a bench up ‘ere.’ By pure chance he ended up in ‘Tory Corner’ and as he was a lifelong socialist I imagine he will be relentlessly spinning.

I have found a balance, a place of calm without my Dad, but that doesn’t mean the sense of loss has gone away. I carry his legacy with me.  Shannon Alder wrote:

“Carve your name on hearts, not tombstones.
A legacy is etched into the minds of others and the stories they share about you.”

When I have been stressed at difficult times of my life since his death – bereavement, moving house, family celebrations, changing jobs – I wished he was there. Not because I ever discussed these sorts of things with him, but somehow, I feel more ‘adrift’ less ‘grounded,’ more ‘insecure’ less ‘safe,’ knowing he isn’t in the world.  A special kind of ‘lonely’ perhaps sums it up. Don’t get me wrong, I have a wonderful husband and family, but there is something about being an orphan, even after all these years, that still pangs in the heart. I’ve had my DNA sequenced, I’ve been researching my family tree – all strategies for rooting myself in something, anchoring my living self in the past, in my ancestry. My father is buried in his local churchyard, with my mother, my brother and baby sister – there is something reassuring about the ancestors being in one place – watched over by the village, sharing space, a dimension of the dead, with all those who have gone before and all those who will join them in the future.

Do you have personal experiences to share – finding peace, letting go, remembering, celebrating, missing. Please email us with words and photos. It can help others.

2 thoughts on “Death and letting go”