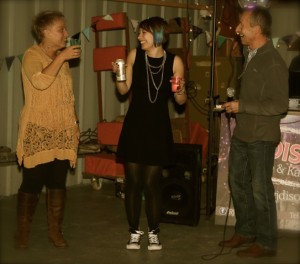 Evie Douglas, dancer at her 21st with mum and dad – only 5 weeks before her suicide.

Please help make the project happen. Back it on Kickstarter. Final Fling has. (At the last count, with 11 days to go, Catriona has secured £8,602 of the £12,000 needed from 148 backers. Please join in – every tenner counts.)

Following the tragic suicide of 21 year old dancer, Evie Douglas a friend of the family, and the experience of a close family member’s own struggle with anxiety, we (my son Jamie, daughter Caitlin and I) decided to make a film about mental health, suicide and young adults.

At the heart of the film will be Evie’s story but it will also look more broadly at the complex issues involved. The plan is to take the completed film to schools, youth clubs, health services and Scottish Parliament to raise awareness and hopefully have a positive impact and help break the taboo around this issue, so that young people may feel more able to talk about it and seek help.

The film’s working title is Careless. It’s going to take months of work, including extensive research and we’re trying to raise funds to realise this project.

I’m practising visual artist. Caitlin Delves my daughter, 23 is a film-making student at Duncan of Jordanstone College of Art in Dundee and Jamie Delves, my son is 21 and has completed a foundation course in film-making at Edinburgh College and is now at Edinburgh University.

In the last few years my practice has encompassed film-making and the three of us have done several film projects together: Kick Oan, a documentary about Hawick Common Riding; A Year in the Life of the Roxburgh Estate, film scenes for a Fringe play and Flow which featured Evie as the dancer.

Careless will be Evie’s story and it will pose the question: why does someone who is beautiful, extremely talented, academically qualified, and with a loving and supportive family choose to die?

But the film will also look more broadly at the complex social and psychological issues involved. To begin I will run a workshop with young clients from, a local mental health charity, using drawing and creative writing for the participants to describe the experience of depression and anxiety. We will possibly also use film in the workshops. We will then use Green Screen and Adobe After Effects to create images/footage of descriptions of depression gathered from the workshops and other research/readings.

We will use animation to visually get inside the heads of those with depression and to demonstrate the mental disturbance of anxiety – to visualise in striking ways rather than simply verbalise – using the medium of film to really engage audiences. We will use a young person as a presenter to link the different aspects of the film.

The film will also include the role of social media, self harm, social and careerist pressures, interviews with NHS professionals and genetics to explore suicide and young adults.

I would like to tour the finished film to schools, youth clubs, the Scottish Parliament and have a screening for health professionals to hopefully illuminate, raise awareness, create discussion and make young people who are silently suffering depression or anxiety more able to seek help.

You can help Careless to happen and help young people. See more about the Kickstarter project here.

If knowing each other better in life and honouring each other at the point of death matters to you, we encourage you to store your thoughts, wishes, life highlights and memories on Final Fling and pass them on. Find 10 things to do on Final Fling. Start a free account now.

2 thoughts on “Suicide and young adults”