This week’s blog about relationships and illness comes with grateful thanks to Chris Rawlence of Rosetta Life and Andrew and Cath who appear in the film titled When Things Fall Apart, generously sharing their experience living with a life limiting condition 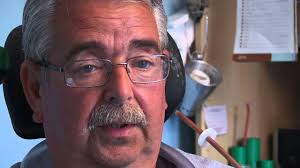 Andrew talks relationships and illness in a film by Rosetta Life

“Sometimes you do things on impulse,” says Chris Rawlence who runs the inspiring charity, Rosetta Life.

“I usually spend time with people before filming with them so that I can glimpse the core of what we will be addressing in advance and gain their trust,” said Chris.  “This time it was different.”

Chris hadn’t started out to make a film about relationships and illness. The theme just emerged.

“I had been chatting with Andrew for about an hour sieving our conversation for pearls that might form the centre of subsequent filmed sequences.  Nothing much had grabbed me so far and I couldn’t see the shape of a film emerging.  I had heard about his part in Glasgow’s ice cream wars in the 1970s, about his running a small post office, before becoming a nurse.  He had told me about his life-limiting MS diagnosis and the last decade of remorseless decline into the wheelchair bound and oxygen mask dependent life he now led.  Then came the bombshell.

A year ago, Cath, Andrew’s wife and carer for the past decade left him for another man.

“Cath still looked after Andrew but, as he put it, ‘the spark was long gone’.  It was then that I put aside my usual procedure and asked Andrew if I may start filming there and then because I knew immediately that this marital breakdown, within the context of life-limiting illness, would be at the centre of the film and I wouldn’t get the story as vividly if repeated a few weeks later.  Andrew said yes and we continued our conversation about the emotional heartland of illness on camera.

“Later I realised that the film had to have his ex-wife Cath’s voice at its centre and she agreed to me filming her.  It was a profoundly emotional encounter with resonances to my own life.

“We had spent much time in the 1970s, in the slipstream of second wave feminism, trying – with varying degrees of success –  to redefine the parameters of ‘non-possessive’ relationships.  Here – 40 years later – was a couple from Alva, a small Scottish town, who had found a way through a similar conundrum in the hardest of circumstances.”

Still Andrew’s carer, Cath now also has Alan in her life. The film tells their story of relationships and illness and how they are surviving both.

“Andrew and Cath have come through the pain and anger, no doubt provoking the severe censure of others, to what seemed to me an exemplary model of living.

“Though Andrew did let slip in an aside that he ‘could still do with a woman in his life.”

Rosetta Life produce films and run arts projects that explore relationships and illness, life and death. They involve people with long term illness to change the way we perceive and treat people who are frail and disabled, living with life limiting illness. Their performance, film and writing projects show how it’s still possible to have an active cultural life and how important it is for the voices behind the illness to be heard.