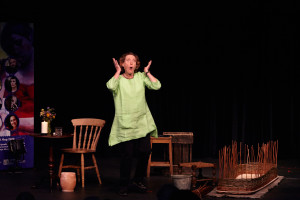 August is here and with it comes the Edinburgh Festival and Death on the Fringe. Death has had its own category at the Fringe for the last two years. “About time” says Liz Rothschild, who blogs for us this week about her show, opening on 4 August.

“Death it is relevant to every single person at the Festival.  Thanks to many important initiatives like Dying Matters, the Natural Death Centre, Death Cafes and of course Final Fling, the subject has been finally propelled into the limelight.

“I am a performer and a celebrant and I run a woodland burial ground between Oxford and Swindon. I was delighted to be winner of the Good Funeral Awards Cemetery of the Year in 2015.

“I’ll be in Edinburgh this year with my new solo piece, Outside the Box – A Live Show About Death. It’s running at the lovely Summerhall venue, a very exciting, lively venue with many different spaces, courtyard bars, cafes and exhibition spaces.  It is a thriving, year-round arts centre in the old Veterinary School by the city’s verdant Meadows and brings interesting work from both the UK and abroad – so I am delighted to be part of the Festival there this year

“The first shows in Swindon and Brighton taught me a lot and I hope to be able to put this learning into practise as the tour continues. On the first day I sat in the wings trying to remind myself why I was putting myself through this ordeal! Nobody told me to do it!  But after the first performance and the response from those there I felt heartened and encouraged that there was indeed something of value in what I had written that could be helpful to others. I imagine many of you reading this blog will be well aware of the value of having conversations about death and I hope this show will prove a useful contribution to the discussion. I hear lots of positive reports from people who are just glad to hear the subject aired and have the chance to learn things they didn’t know.

“The value of the post-show talk is enormous for me as much as the audience.  I pick up new ideas and stories and carry them with me so that they can be shared the next time I am performing… a bright red thread of insights stitching its way around the country.

“When I first had a rehearsed reading of the piece I had inserted questions into the body of the text but I found that neither me nor the audience enjoyed this. We all had to change gear  too violently and it didn’t work. However, having removed this element from the text I found that my audience was reacting very volubly, loud sounds of agreement, demonstrative shakes of the head and even words shouted out told me that what I was saying was definitely resonating.  I hope to be able to use these responses more actively as I began to experiment on tour.  So the show is flexible and always waiting to change shape slightly depending on what I encounter.

“The show weaves in stories both personal and professional about my experiences, a hint of history and some pithy commentary on the funeral industry.  I have learnt a lot from my own mistakes and from the many people I have worked with and this show tries to encapsulate all of this.  It premiered at the Swindon Literature Festival and then went straight to the Brighton Fringe festival. Here’s what Zelah Senior, reviewer in Brighton said amongst other things.

Rothschild’s story telling was consummate. From the very first words: “I saw my first dead person…”, her stories were intriguing. She drew the audience in close, gently probing and questioning our society’s discomfort around death and reluctance to talk about it. The stories provided a real life backdrop for the key educational messages of her performance: you have a huge amount of choice at the end of life relating to your care, the treatment of your body after death, your funeral, and the disposal of your body – use it! Her narrative fluidly blended hard-hitting facts – 70% of us in the UK die without a Will – with tender, heart-breaking experience and death bed humour.

“Other responses have been very encouraging –   “Informative, uplifting and life-affirming” said one audience members and Matt Holland, director of the Swindon Festival wrote “It made me laugh, it made me cry.  It made me want everyone to see it”  Phew!  That’s lucky because my plan is tour it all over the UK during the next few years .  Obviously, because I have the day job to think of back on our farm on the Wiltshire/Oxfordshire border so I shall go away on a series of mini-tours around the country.    Luckily, I also have an excellent team who can hold the fort while I am gadding around with the show.

“Right now I am in the final throes of pre-Edinburgh rehearsals and finding out if I can fit everything I need in to my car for Edinburgh including two coffins!  I am trying to find a plant that will survive the rigours of persistent poor light and yet still look colourful and thriving on stage. Ideas anyone?   I have teams of helpers ready to join me up there both stage managing the show and tramping the streets of Edinburgh with our posters and flyers ready to replace them when they have been torn down by rival companies.  It’s a jungle up there!  Look out for us with our coffin on the Royal Mile and elsewhere.   Come and put a postit note on the top or get a picture of yourself trying it out for size.  We hope that even our presence on the streets will lift the lid a little on the subject.  Every person who comes to our show also receives a free programme with a list of invaluable resources on the inside.

“In 2012 I ran my first festival of living and dying in Oxford called the Kicking the Bucket festival.    It nows runs bi-annually and this autumn it is happening again www.kickingthebucket.co.uk.    I wanted to reach people before they have been bereaved so that they could fully understand what was possible before being in the whirlwind of emotions that takes over when someone has died.  Feedback repeatedly expressed a feeling lighter, closer to other people, less afraid.

“I wanted this effect to go wider and so have been developing the script over the past five years.  It is now ready and some performances in Brighton led to very long post show conversations which were wonderful and I found, as I expected, that people are full of stories and questions and delighted to be sharing those as they do at a Death Cafe.  The show acts as a powerful catalyst to begin those conversations and for those who do not actually want to speak in public offers a rich range of food for thought for them to take home and digest.  We are gathering some of the stories up as we go and putting them on our website and already one new tale found its way into the show because it was irresistible!   People often come to the Kicking the Bucket festival with their parents or children as a way of facilitating conversations they are wanting to have. I very much hope Outside the Box will act in the same way.

“Come and see me at Summerhall.  Preview on 4th August and then performances daily at 11.50 from 5th-21st.  Do talk to me afterwards even though sadly there is no opportunity to talk for long in the actual theatre because of the next group coming in to perform there.  If those dates or that geography doesn’t work visit our website and see if our tour is coming anywhere near you.  If not and you are interested in booking a performance do get in touch and maybe we can bring a performance to your local village hall, Arts Centre, college or festival.  The show will be on the road for the next couple of years at the very least.  Please tell your friends and your family.    I look forward to meeting you somewhere.”

2 thoughts on “Outside the Box – A Live Show about Death  ”