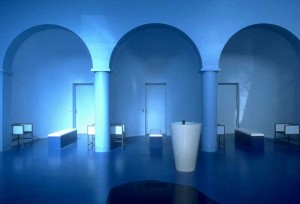 Music and death go hand in hand for some of us.

Music we shared in our life with others. Songs we sang together. Sounds we danced to. Musical memories of good times. Poignant, plaintive, painful, powerful connections to days of our life upturned by death; music and death can be fused together in the fabric of our memory.

“After silence, that which comes nearest to expressing the inexpressible is music.”
Aldous Huxley, Music at Night and Other Essays

Raymond Poincare hospital in the suburbs of Paris recognises the importance of bringing music and death together. This trauma hospital has created a sensitive morgue for families to visit. Ettore Spalletti, designer created a blue and soothing room. Musician and composer David Lang created the music.

The hospital deals with a large number of vehicle accidents and the outcome is often sudden and traumatic deaths. Other hospitals deal mostly with chronic illness where the death is expected.

Lang wanted to create something that could not be reproduced in a live setting. He thought that would be cheating, given the context. “Music by-passes all of your normal protection mechanisms. It goes to the part of you that is not dealing with language or rationality. It has this ability to go around all of your defences. I wanted to make something which gave people permission to examine which way they wanted to go with their emotions.”

Almost 500 deaths a year happen here from fatal injuries. Professionals noticed that traumatic death almost froze families’ ability to grieve. Lovers and family members visiting the hospital tended to be in shock, coming to claim the bodies of loved ones who were very much alive the last time they saw each other.So this thoughtful calm space was created to provide a bridge to accepting death after trauma. A place of quiet and calm and reflection. It is both a chapel and a morgue, where the body is placed for the family to view and say goodbye. The name of this room is Salle Des Departs (translated departure hall or room).  The room was designed by Italian artist Ettore Spalletti, and is meant to be relaxing and beautiful with blue tones and minimalism elements.  The space needed more than calming hues, so two music compositions were commissioned from David Lang and Robin Rimbaud (aka Scanner) to be played in the background if the family chose. Interestingly, both Lang and Scanner had experiences with traumatic deaths in their past. Scanner, who’s father had died in a motorcycle accident, identified with how the lack of formal mourning affected his family and used his own experience in his piece.