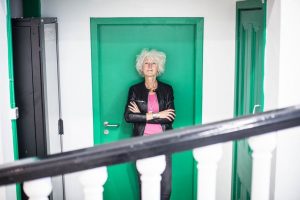 The big news today is that Barbara Chalmers, Founder of Final Fling  now has a Masters in funerals.

“Well, in reality, it’s an MDes – a Masters in Design Innovation, Service Design – and my final project was on funerals, so I consider it a Masters in funerals,” said Barbara. “I just found out on Friday at our degree show that I achieved a distinction for my Masters in Funerals (as I call it) and I couldn’t be more delighted.” 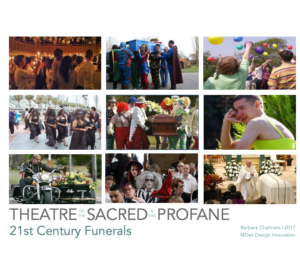 Award-winning ideas by death explorer, Barbara Chalmers.
In depth research and smart imagining: how funerals are; how they could be. Tackles funeral poverty and poverty of ceremony. Winner: Innovation. Winner: Design. Glasgow School of Art (ebook)

Barbara not only gained a Distinction, but up against 50 bright young international students, she was double award-winning. The was gifted Glasgow School of Art’s Chairman’s Medal for Design and the Innovation School’s inaugural award for Innovation. The Innovation by Design prize recognised her exemplary use of design as a means of exploring how we deal with end of life care and funerary practices.

“So many people contributed to thinking and helped with research,” said Barbara. “Tony Foster of Fosters Funeral Directors played the biggest role, allowing me behind the scenes in his incredibly impressive family firm. Karen Horn of McLeans Funeral Directors also took me in. Many professionals in the community also took part… people who are setting the standards for the next generation of funeral practices: Fran Hall of the Good Funeral Guide, Poppy Mardall of Poppy’s funerals, Carrie and Fran of A Natural Undertaking and more.

“Flingers came along to a Death Meet-Up to take part in research called The Thing About Funerals Is... and hundreds came to an exhibition and provocation on the same theme at Glasgow’s Gallery of Modern Art.

“I worked with two hospices – the Prince and Princess of Wales Hospice and St Vincent’s – who also helped me fine tune ideas. It’s been a real co-creation project.”

The final design solution is a 4-part world that envisions change in the public and private sector that would end funeral poverty, include citizen confidence around funerals, provide a leveller for funerals and help educate the public about their choices and options.

The findings were significant enough to interest Scottish Government and the academic sector. Barbara has presented them to officials within Government and was filmed for a Massive Online Only Course (MOOC) by Glasgow School or Art to disseminate findings.

The final report is huge, so if you are interested in finding out more, email Barbara.

Barbara came to the Masters in Design Innovation with experience in designing services and experiences in the public sector, in the arts and of course, in end-of-life, with the development of the award-winning Final Fling. See more about Barbara on LinkedIn.

See more about 48 Conversations, the MDes Degree Show at Glasgow School of Art.

2 thoughts on “Masters in funerals”