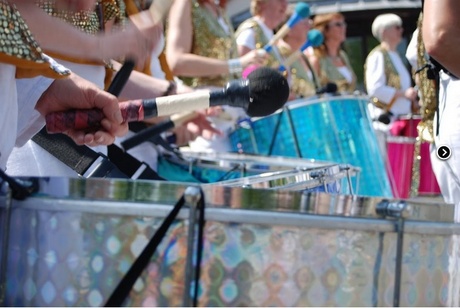 Beat That – Scotland’s longest running samba band – played a tribute to Mandela’s life and achievements on Sunday 8 December outside Glasgow Royal Concert Hall with ONE MINUTE’S NOISE, as reported on Scottish Television.

Beat That celebrated its 21st birthday this year and was the start of the women’s drumming movement in Scotland: a movement that spawned Glasgow’s SheBoom and Barulho Beat, Edinburgh’s Commotion, and Fife’s Impact. Women from all the bands are invited to join.

The band opened last Hogmanay for The Proclaimers in Stirling and brought this year’s incredible West End Festival parade to a close.

Final Fling’s Founder, Barbara Chalmers, will be playing with the band who will be joined by SumWumminDrummin, Irvine’s women’s band.