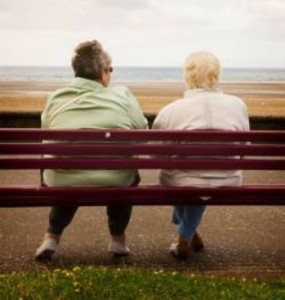 I’ve been involved in a great piece of work recently, looking at the issue of LGBT and aging, with a focus on the way older LGBT people are represented in adverts, publicity and information.

(Btw, I’m using the American ‘aging’, rather than the UK ‘ageing’ because search engines can’t spell.)

My in-depth analysis as a communications professional and my personal view as a 55+ lesbian woman is that we’re crap at recognising that LGBT and aging might be words used in the same sentence. Perhaps we think sex is for the young? No need to worry ourselves with uncomfortable thoughts about older people and sex? You don’t have to be sexually active (we’re not time-bombs!) to identify as straight, gay, lesbian or bi-sexual. ‘Sexual orientation’ is just our best attempt at creating a broad brush to codify, sort out, pigeon hole, label… make tidy the messy, complex thing that is the human condition.  Imagine a life lived with a partner then at a time of loss, not only do you lose your partner but you may find you’re denied your identity as an LGBT person in a care home. Nightmare.

I went along to a workshop commissioned by LGBT Health and run by the fantastic, creative Becky Duncan of Open Eye. (Becky originally helped Final Fling alight on our image style… real people, living real lives). Becky facilitated an exploration of the images we’re currently exposed to – first with a group of LGBT people then with third sector organisations who want to reach LGBT people, often in a context of ageing, later life or end of life.

Here were some of the issues that emerged from discussion.

Images we viewed were too 1-dimensional. They were mostly heterosexual, silver haired, white teeth, always handsome couples in sunshiny settings. The homosexual variety were cliched, obvious, extremes of lipstick and beard, flouncy/camp, butch women. Of course, we need stereotypes sometimes to get the message but they need to be balanced and move away from the ends of the spectrum. There was a widely supported call to promote images that celebrate diversity and individuality. A balance between “get real” and “celebrate the queer!” Let’s see authentic models, good quality images, real lives.

Ultimately organisations with a common interest should come together to build a vast and varied bank of images that includes sensitive stereotypes and much much more.

And a plea – don’t be afraid to portray older people as intimate, as lovers. That’s the dream surely!

Let’s get away from showing LGBT and aging in limited contexts. I’m a worker, a samba drummer, a coach, a friend, a mother, I wear dungarees as well as suits. I swim, cycle, paint, dance, garden. I like a large red and a small beer. I’m as multi-faceted as everyone else.

Funnily enough, the organisations participating said they’d be interested in accessing an image bank if images were free. Come on folks. Invest! How much would it cost to build a decent photography bank in a ‘creative commons’ approach that everyone shared. Becky could do a great job of curating this, ensuring fully informed consent of models – just as essential as getting the right picture, with the right message and right feel.

If you’re interested in a fairer world, do something about it.