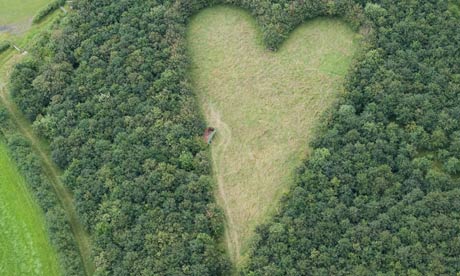 Our favourite has to be this spectacular lasting tribute. The oak heart-shaped forest.

OK, you have to own a few acres and have a few decades foresight but those conditions in place, you could do what one farmer did – pay tribute to the wife he lost by planting a massive oak forest around a heart-shaped meadow.

The aerial photo above revealed thousands of oak trees planted as a labour of love by Winston Howes as a tribute to his wife of 33 years, Janet.

He planted the oak saplings after his wife died. A couple of decades later, what a tribute! He laid out the fledgling trees in a 2.5 hectare (6 acre) field on his farm but left a perfect heart shape in the middle – with the point facing in the direction of her childhood home. The meadow can’t be seen from the road and remained a family secret until a hot air balloonist took a photograph from the air.

“I came up with the idea of creating a heart in the clearing of the field after Janet died,” said Howes. “I thought it was a great idea – it was a flash on inspiration – and I planted several thousand oak trees. Once it was completed we put a seat in the field, overlooking the hill near where she used to live.

“I sometimes go down there, just to sit and think about things. It is a lovely and lasting tribute to her which will be here for years.”

Winston decided to seed Janet’s legacy after she died from heart failure in 1995, aged 50. The entrance to the secret heart is only accessible from a track leading up to its tip.

If, like me, you have neither acres of land or time on your hands, you can always just post a quick tribute on Final’s Fling’s Notices & Tributes page – it’s free to use as comes with our suite of free Life Planning Tools. I use the Tributes to remember anniversaries (or ‘deidiversaries‘ as our friend Sharon would have it) by simply posting a photo of my mum, dad, others I’ve lost – say their name, share a memory.