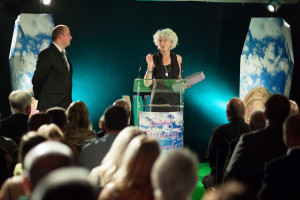 Brian Jenner began this annual tradition with a festival called the Joy of Death. He enlisted the guidance of Charles Cowling, blogger, of the Good Funeral Guide. Charles is a much-loved provocateur who doesn’t do the job but has very strong views about how funeral directors could serve us better. He’s done a massive amount to open up the industry, make connections and ensure the industry keeps up with the changing world (and keeps its socks pulled up).

If you didn’t know this fairly secret world, you might imagine lots of men in black, doffing bonnets and speaking in hushed tones. It’s nothing like that. Everyone I’ve ever met in the industry is warm, real, delightful. Ironically, the event is full of life.

“Since 2012 we’ve been recognising the great work of the country’s best gravediggers, embalmers and funeral directors,” said Brian Jenner. “We’ve championed the entrepreneurs, pioneers and progressives.”

The awards are based on feedback from the general public with a panel of judges having the tricky task of selection.

The list of nominees gets broader and bigger every year.

In 2016 the awards will be at a lunch at the Porchester Hall in London on Thursday 8 September.

Find out more about the longlist and book lunch and awards tickets here.