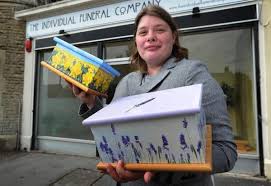 For Dying Matters Awareness Week, we thought it would be good to introduce a Funeral Director. We’ve chosen Lucy Jane who started the Individual Funeral Company in Oxford only 15 months ago.

Find Lucy and funeral directors near you on our Marketplace.

“Well the first thing to note is that it has been a pretty quick fifteen months! I had no idea when I opened that time would go so quickly.

“It did take a while for people to start coming into the office, but once they had, it hasn’t stopped. After my office had been open for 6 months, we were featured in our local paper. A friend that I hadn’t seen from school called me because his Mother had died. He wanted a funeral that was more formal and traditional so I arranged a horse drawn hearse and a bag-piper to play. When I was arranging the funeral, he said they would all be wearing a purple tie because it was her favourite colour. The day before the funeral I went out and bought one too. I had also arranged for the horses to have purple plumes and for the grooms to wear purple ties.

“My friend was really involved in the whole funeral process and I think it really helped him. The last thing he said to me after he drove away from the funeral was: “Not only did you do Mum proud, but you did me proud too. I did notice you and the horses and I can’t believe you went to so much effort.”

“Sometimes the little things have the biggest impact and all it took was a phone call and ten minutes in Next buying a tie.

“More articles followed and then I was invited onto BBC Radio Oxford. I am now their “go to” person for anything funeral-related because I say it like it is. I was nominated for “Funeral Director of the Year” at the Good Funeral Awards as well as “Best New Business” at the Venus Natwest Business Awards. All of those things really helped to expose the company.

“I think the most important thing to say is that I didn’t do any of this on my own. My family help me with the business, I have amazing suppliers who help get the things I need in the shortest time possible and I have a bank of cheerleaders and without whom I wouldn’t be as far down the path as I am .

“The most important people to thank are those who have used my company since we opened. I feel extremely privileged that they chose me to take care of their loved one.”

If you offer helpful end of life services – as a funeral director, celebrant, soul midwife or around legal and financial advice, please make sure Final Flingers can find you on our Marketplace.