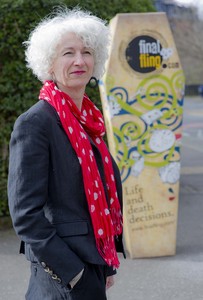 FinalFling.com is the first website dedicated to end of life decisions that celebrates a wealth of choice and control and provides the tools to plan, seek advice and discuss the issues around death. The website is created so we can take those all important first steps to make sure we end our lives in the same purposeful way that we live them. Speaking at the launch FinalFling.com founder Barbara Chalmers said; “FinalFling.com is more than just an online funeral planner. We hope Final Fling will be to death what mumsnet is to birth – a place to come if you find yourself in new territory, unsure.” “The UK is facing a care crisis. We have a growing and ageing population and shrinking budgets for health and care. We are heading into the golden years of the Baby Boomer generation, who like to be in control and want to do things differently. FinalFling.com offers a win-win solution. It’s a one-stop-shop for end of life planning. “Government gets active citizens who take personal responsibility. Citizens get the power to make decisions, change their mind, influence their care. Government saves money on end of life care. Citizens get closer to having the death they want. And evidence shows this has a huge positive impact on grieving families.” FinalFling’s mission is to encourage people to think ahead, talk openly, challenge the norm and take control of the plans for death. Founded by life coach and communications strategist Barbara Chalmers, FinalFling.com was created to help people make life and death decisions whilst valuing choice, control and difference. 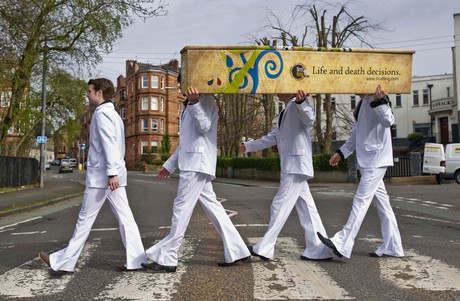 Final Fling launched in April 2012. Its mission, to encourage people to plan for the end of life just as they do life insurance and pension planning. Final Fling is tackling the last taboo – death, encouraging people to think ahead, talk openly, challenge the norm and take control of life and death decisions, right till the end. The site features practical, emotional, spiritual and creative support. FinalFling.com sources a wide range of services. There are the more obvious: the Marketplace with directories of funeral directors and celebrants; products and services – wicker coffins, motorbike hearses, ashes made into fireworks or diamonds, planes and boats for scattering ashes. There are the more esoteric: environmental artists and stone carvers who can create memorials; writers, painters, photographers and film-makers who can create portraits, biographies and capture stories to celebrate a life; and the less-known ‘soul midwives’ and ‘death doulas’ who provide end-of-life-companion services for the increasing number of people who live alone and ‘celebratory artists’ who can create meaningful rituals for a ceremony, funeral, end of life celebration or memorial. “Religion, authority and tradition may have lost their hold in our increasingly secular society but we still have the need for spiritual and emotional support,” explained Barbara. “We have associate artists who can help create what you might call ‘rites of passage’ events that mark life’s milestones. We have end of life companions to support someone on their final journey. We can point to Humanists, independent celebrants, ceremony planners and creative artists who can help them find the balance between sombre and celebratory to create those rich rituals that help healing after a loss. “By opening up talking about death and dying, FinalFling hopes to help people achieve the death they want – and evidence shows that if we get the death we want, it’s easier for family and friends to cope with the loss. The starting point is thinking, talking and recording your wishes. That’s what we’re here for.” Notes to editors: Why FinalFling.com? UK care crisis:

In 2010 there were 14 million over 60s in the UK. By 2030 it’ll be nearly 20 million – more than a quarter of the population. Half a million people each year in Britain die. That’s set to increase to 590,000 by 2030. Few have private insurance plans, more people have to work longer to support themselves in old age. Half of us don’t have enough savings to get us through old age. 2 million over 75s live alone. (Source: National Palliative Care Alliance and National Care Forum report: A 2030 Vision published March 2012.) A Final Fling commissioned survey has shown that talking about death appears to be more important than ever as respondents confirm: