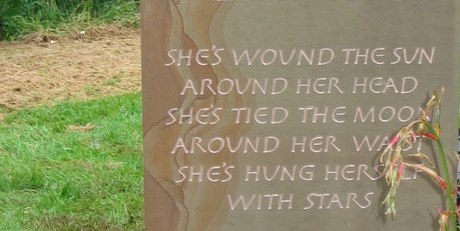 The wording on a gravestone will read something like:

If you’re looking for inspiration for a memorial or headstone, have a look at what’s been written on the tombstone of some of life’s great legends below.

PS We’ve organised these alphabetically by first name, because legends, we find, cock a snoot at our very dull convention of arranging by surname then first name. How would that work for Gustavo III, King Arthur, Alexander the Great, Billy the Kid?

Alexander the Great
A tomb now suffices for him

whom the world was not enough

Benjamin Franklin
The body of Benjamin Franklin, printer (like the cover of an old book, its contents worn out, and stript of its lettering and gilding) lies here, food for worms. Yet the work itself shall not be lost, for it will, as he believed, appear once more in a new and more beautiful edition, corrected and amended by its Author

Bette Davis
She did it the hard way

Billy the Kid
Truth and History.
21 Men.
The Boy Bandit King
He Died As He Lived
William H. Bonney “Billy the Kid”

Bonnie Parker
As the flowers are all made sweeter
by the sunshine and the dew,
So this old world is made brighter
by the lives
Of folks like you

Cecil Rhodes
So much to do, so little done

Reader, if you seek his monument look around.
Interred in St. Paul’s Cathedral of which he was the architect

Everybody loves somebody sometime.

The best is yet to come.

He thinketh no evil.

A Gentle Man and a Gentleman

The Stone the Builders Rejected

We live to love you more each day.

Murdered by a traitor and a coward whose name is no worthy to appear here.

This Grave
contains all that was Mortal
of a
Young English Poet
Who
on his Death Bed
in the Bitterness of his Heart
at the Malicious Power of his Enemies
Desired
these words to be engraven on his Tomb Stone
“Here lies One Whose Name was writ in Water.”

Workers of all lands unite. The philosophers have only
interpreted the world in various ways; the point is to change it.

Alien tears will fill for him pity’s long-broken ern,
For his mourners will be outcast men,
And outcasts always mourn.

Here underneath dis laitl stean
Laiz Robert Earl of Huntingdon.
Near arcir ver az hie sae geud,
An pipl kauld im Robin Heud:
Sic an utlawz as hi an is men
Vil England niver si agen.
Obiit 24 Kal, dekembris, 1247
(Here underneath this little stone
Lies Robert, Earl of Huntingdon.
No archer was as he so good,
And people called him Robin Hood.
Such an outlaw as he, and his men,
Will England never see again.)

Stop, Christian passer-by: Stop, child of God,
And read, with gentle breast. Beneath this sod
A poet lies, or that which once seem’d he–
O, lift one thought in prayer for S. T. C.–
That he who many a year with toil of breath
Found death in life, may here find life in death:
Mercy for praise–to be forgiven for fame–
He ask’d, and hoped through Christ. Do thou the same.

I told you I was ill.

A master of comedy his genius in the art of humour brought gladness to the world he loved.

Against you I will fling myself.
Unvanquished and unyielding, O death!

Here lies W.C. Fields. I would rather be living in Philadelphia.

Wild Bill
J. B. Hickok
Killed by the assassin
Jack M’Call
In Deadwood, Black Hills
Aug. 2d 1876
Pard, we will meet
again in the Happy
Hunting Ground
To part no more,
Goodbye

Good frend for Jesus sake forbeare,
To digg the dust encloased heare!
Blest be the man that spares thes stones,
And curst be he that moves my bones.