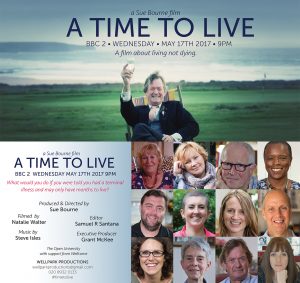 Perfectly timed to keep up the momentum of Dying Matters Awareness Week, is next week’s  A Time To Live: a documentary about dying. It airs on BBC2 on Wednesday at 9pm.

“I met with documentary maker, Sue Bourne in March last year,” says  Barbara Chalmers of Final Fling. On the back of making the very successful film The Age Of Loneliness, the BBC asked Sue what she wanted to do next. She wondered what it would be like to live in the light of a terminal diagnosis and was looking for help to reach out for participants. “I was glad to help and reach out to members of the Final Fling community – people who are engaged with the process of living and dying.”

A documentary about dying that’s really about living

“I didn’t want to make a film about dying but about living,” said Sue. “I wanted to speak to people who’d decided that if they only had a short time left they were going to make the most of that time. It was a subject close to my heart – I’d had cancer and had lost people close to me. I knew this was a subject everyone would be interested in. We are all going to die. And shockingly now one in two of us will get cancer.”

Sue decided to focus on people living with a terminal diagnosis. “I discovered they were often calm, even serene, about their own death but found the grief of those around them difficult.” She was determined the film would not be miserable but leave viewers with a feeling of hope, maybe even inspired by the spirit of all the people I interviewed and how they find some sort of positivity in a terminal diagnosis.  She decided not to film anyone having treatment. It was not about the inside of a hospital but about what’s inside the head of a dying person.

Sue aimed to interview a spread of people aged 20-60.  “It took over three months to find the people in the film. Along the way we met some truly inspirational people. Some became too poorly and others died before we could film them.”

A documentary about dying helps others

Sue was asking a lot of her dozen or so interviewees. She wanted to know what they felt like when they were told they were going to die, how they came to terms with that news, how they managed to find a positive way of living, what scared them, what made them happy, what choices they had made.  She wanted honesty. She was asking dying people to bear their souls on camera and answer tough questions.”They had to a) trust me and b) know me quite well by the time we did the filming. The reason they made the difficult decision to take part in the film was because they believed in what I was trying to do. They wanted to make a contribution. They believed that if people listened to what they were saying then it might make it easier for others to face death too. Every one of them was doing it in a different way. But they all believed that they had made things better.”

In the documentary you’ll hear some remarkable things like “I have had some of the happiest moments of my life in the last few months”… “I consider it a privilege to know that I have only a finite amount of time left – I can put my house in order ”…“What is the point of being sad – I want to be happy and have fun for as long as I can.”

Good days and bad days
Very often, when we were due to film someone, their blood count would drop dangerously low so we‘d have to change our plans instantly. We’d then phone our next contributor, usually at the other end of the country to ask if we could turn up a day early. We hired a big eight seater van which became almost our home for three months as we drove hundreds of miles round the country – just the three of us.  It was an amazing experience. Tough but ultimately uplifting and inspiring.

Editorial decisions
Sue’s job is such a sensitive one. “One major decision I made was that I do not want to say in the film who is alive or dead. Everyone in the film knows that that was the plan and they are happy with that. I don’t want people to be overcome with sadness when they hear that Nigel or Annabel or Fiona or Steve has died since we did the filming. Instead we just won’t say one way or the other. Then we can all hear what they wanted to say about living.”

Look out for the film on BBC2 or watch again in iPlayer.

Find out more about others’ personal experiences on Final Fling. Contribute your own story. Email Barbara to share.

Sue Bourne is one of the UK’s leading documentary makers, with acclaimed single films such as The Age of Loneliness, Fabulous Fashionistas, The Red Lion, Love, Life and Death in a Day, My Street and Mum and Me among her many credits. Her films explore some of the big issues facing society, told through the testimony of multiple characters. She runs her own micro independent production company, Wellpark Productions. .