Lots of art is based on life and death. Like love, death is A Big Theme and huge inspiration for thinkers, artists, film-makers, writers, musicians and – well, most human beings.

Here we share a light sprinkling of the work of thousands of artists whose art is based on life and death. Reflections on the unknown-ness of it all, ideas about the space between here and the hereafter and encourage pondering, wondering, musing – and even occasionally amusing views of life and death. (We have some inspiring images on Pinterest too.

Pia is an artist, designer, dresser of the dead, celebrant… whatever works to connect life to death in a nurturing way. Her intricate fabrics and costumes feature in a collaboration with the Tony Yap dance company in the film below. Part ethereal, part biological, her garment pieces adorned the 9 dancers in a sold out, one night only, show. With 12 m tall ceilings, her distorted organza ‘sails’ filled the space creating a fragmented screen for visual artist Matthew Gingold to project upon and dancers to move amongst.

Thanks to Silk Street Jazz for this film capturing an exciting late night event that explored what death has to tell us about life. It invited people to imagine what they would choose to do today if they were going to die tomorrow, and how it would affect their outlook on life; how they would like to be remembered after they die; what they would like to achieve before they go. There were talks, stories from around the world, activities throughout the galleries, a ‘Last Dance’ class and the chance to design an ideal fantasy funeral. The event enabled people to embrace the inevitability of death and celebrate life and was hosted by The Wellcome Collection -“a free visitor destination for the incurably curious that explores the connections between medicine, life and art in the past, present and future.”

Funeral Band – Seize The Day from Silk Street on Vimeo.

We’re loving the Death & Design website with links to interesting samples of design in the public realm. There’s a nice piece of audio on here by Victoria Estok which chimes with the Final Fling way.  Our 2013 Day of the Dead fest featured HearAfter, a work of sound art by sonic maestra and Final Flinger, Nic Scrutton.

Artist Greer Pester is a friend of Final Fling. Some of her art is based on life and death or influenced by it. Greer explored the ancient cultures of north and south American to understand more about their life and death rituals and brought learning back to share in shrine-making workshops for our Day of the Dead Festival. Weddings, birth, death and funerals are right at the heart of all societies. We updated on Greer’s journey in our newsletter, Deadline: “Another marvel in Oaxaca. Felt like we were in the heavens…Walking around Monte Alban, the magnitude of these civilisations is fully realised. I’d happily live on the top of a mountain in these beautiful ancient ruins…”

The Southbank Centre in London featured a 3 day arts festival in January 2012 called Death: A Festival for the Living (that became #deathfest for Tweeting purposes). It featured more than the usual sprinkling of art based on life and death. It was packed full of it and packed out  too- standing room only for all sessions – and as Artistic Director Jude Kelly said, “not a weirdo in sight (well no more than normal)”. It explored the right to die, taboos, designing your own funeral, death rituals across the world, and explored the terrain of mortality, loss, bereavement through discussions, exhibitions, visual art, performance and music. Jon Snow led an empassioned debate on Assisted Dying, Paul Gambacini did the chart countdown on our desert island discs-for-the-end. ‘Ordinary people’ – as if there was such a thing – shared honestly, questioned, wondered and proved that as we know, the notion that death is a taboo is a construct. Jude said she’d fancy round 2 in 2014. Great. We’ll be there with bells on. Meantime, others are popping up – like Liz Rothschild’s Kicking the Bucket Festival in Oxford in Oct-Nov 2012.

Feral Theatre mesmerised a packed lunch crowd at the Southbank’s deathfest – meaning the place was mobbed, not that they were eating packed lunches necessarily.  They have a series of events called Funeral for Lost Species.  This short shows highlights from the performance and sculpture installation at St Peter’s Church, Brighton Fringe Festival, May 2011.

More art on life and death, Liminal is an ongoing exhibition/performance created by artist Douglas Strang. It combines art, poetry and physical theatre and has been staged in small rooms and 50 acre fields, eg at the Dark Mountain Festival in Hampshire. 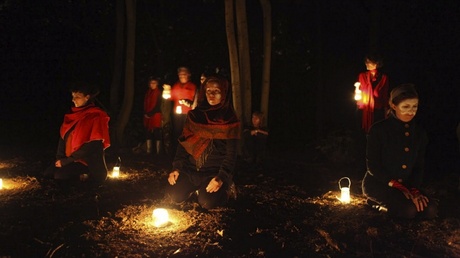 Dougie has a background in the study of folklore and a deep interest in ecopsychotherapy – the critical role of nature in contributing to our mental health and wellbeing. He makes art and creative performances and is happy to facilitate or collaborate on ‘Rites of Passage’ or plan funeral and life celebrations. Dougie says: ‘Our culture has mostly forgotten or degraded the rituals that once so enriched our lives. It has rejected the important connection of humankind to nature that underpinned those rituals and formed the basis of our relationship to the natural world. I think art can play a vital role in redressing that loss.’ Contact: Dougie Strang. Dougie too is interested in exploring ceremony planning with individuals.

The exhibition, Stardust, at St Mungo Museum in Glasgow ran from 2010 to 2011. It was the result of a year’s practice and research by artist Gillian Steel exploring cultural understandings and beliefs about mortality.

Photographer Elizabeth Heyert created a series of postmortem portraits for an exhibition in New York called  The Travelers.  Shot in a Harlem funeral parlour, her life-size photos give a jubilant sense of a life in death.

Sam Winston has been creating a series of works on the theme of life and death, called Birthday.  At the Southbank’s Deathfest, Sam and Jess presented a white and a black canvas.  The black represented death and we were invited to make a circle to commemorate a lost one.  The white represented birth and the same ritual was invited.  Watch the film to see the beauty of the work and hear Sam talk about the process and the inspiration Jess brought to it. Hear Sam talk about his work:  See more of Sam’s work here.

On the Edge of Dreaming

A film by Amy Hardie. Amy dreamt her horse died. She woke up and it was dead. She dreamt she would die at 48 – a year away (then). The story unfolds.

See this wonderful film from Rosetta Life illustrating the power of touch, care, music and movement in helping Patrick have as full and meaningful life as possible despite his life-limiting condition.

The exhibition A Graceful Death by Antonia Rolls has toured the UK. A Graceful Death started when Antonia painted the last few weeks, days and day of the life of her partner “as he gracefully left this life”.

It has grown to include paintings of others at this important part of their lives, as they near the end, and of those who are left behind.  See Antonia’s blog. Antonia is currently fundraising for her work. Find out more about Antonia and her work.

Incandescence is a series of images capturing the last moments of the human body in the material world. Taken within a cremator, the images aim to confront the taboos surrounding death imagery in modern society. The work has been exhibited internationally and the Institute of Cemetery &amp; Crematorium Management featured it in their journal. See Maeve’s web page.

In October 2012, the Baltic in Gateshead had their own deathfest. “Artist and BALTIC Professor Christine Borland is developing research links between medical, scientific and contemporary art practice. Her current collaborative project with fellow artist Brody Condon explores the dynamic of the anatomy dissection theatre and its constituency, considering the potential for performance and role-play within this context. The research for their project Circles of Focus is the foundation for the symposium.” Presentations, lectures, walks, talks, exhibitions on the theme.

See this quality Sundance film festival winning animation This Way Up for a bit of light relief.

The work of artist Jose Guadalupe Posada (1852-1913) is a major influence on the Mexican Day of the Dead.

We love Joshua Bright’s photos of John Hawkins in his dying days.