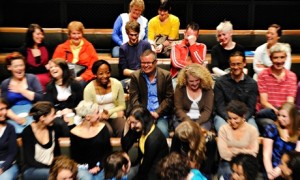 Adrian Howells was a UK-based performance-maker who created intimate and deeply nurturing theatrical experiences. He was one of the artists involved in Final Fling’s Day of the Dead Festival in 2013.

Deeply saddened by his untimely loss, we have kept his entry on Final Fling as it was, in tribute to the work he offered.

Friend of Final Fling and Adrian, Irene Kelso, shared this lovely piece of music on the news of Adrian’s death. We invite you to listen and sing along as you read about our friend.

Adrian delivered Unburden – Saying the Unsaid  for Final Fling’s Day of the Dead Festival on 2 November 2013. An intimate one-to-one piece, it was a nurturing, confessional work in a warm, homely space, with candles and essential oils creating an environment of comfort for a very personal exchange of hope and cleansing.

Adrian often works in a one-to-one, autobiographical, or confessional context; often in non-traditional performance spaces. His work has been presented in Japan, Singapore, Israel, Canada and throughout Europe, as well as at many UK festivals. As a Final Fling associate, Adrian is interested in exploring private commissions for individuals.

Here, Adrian talks about his one-to-one performance, Foot Washing for the Sole. Other works: The Garden of Adrian and The Pleasure Of Being: Washing, Feeding, Holding were also designed for one audience member at a time. 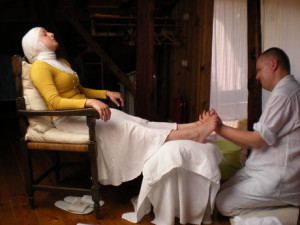 Foot Washing for the Sole, photographer: Hisham Suliman “The whole experience is spiritual and uplifting… an act of kindly kinship and beauty in a world often lacking in both.” The Herald on The Garden of Adrian 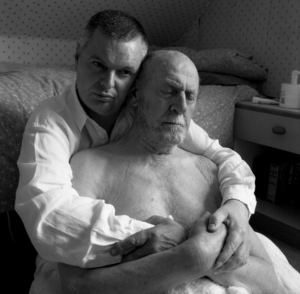 The Pleasure of Being: Washing, Feeding, Holding

“It is a tenderising experience, and I hope it is a profound one for both of us. Quite often people break down and cry; there are very few people who do not in some way surrender to the experience.”
Adrian Howells

“It felt absolutely wonderful and healing to be held in his arms, my head on his chest, arms tangled up and him occasionally stroking my hair. To listen to another person’s heart. To feel the rising of their breathing. To feel the intention behind this individual’s touch, simply to relax and replenish you, was so nourishing to my heart and soul.”

Rubyyy Jones blog on The Pleasure of Being

Adrian studied drama at Bretton Hall College, Leeds University. He worked in physical theatre with Nigel Charnock and moved into more radical performance in the 90s working with director/designer Stewart Laing and performance artist Leigh Bowery. Between 2006-2009 he was the recipient of a Creative Fellowship at Glasgow University.

“The one-to-one experience of having one’s feet washed, massaged and anointed is not only beautiful and comforting but infinitely thought-provoking.”
The Scotsman on Foot Washing for the Sole

“The here and now became a beautiful, timeless space… a genuine attempt to use one of the most ancient and symbolic acts to undo some of the strain of modern life.”
The Belfast Telegraph on Foot Washing for the Sole

The Garden of Adrian

“The whole experience is spiritual and uplifting… an act of kindly kinship and beauty in a world often lacking in both.”
The Herald

“Complete and almost religious respite from the ordinary pace and gracelessness of urban lives… the kind of simple, child-like intimacy of touch that so many solitary 21st century lives now lack. Deep, thought-provoking stuff, very near the emotional knuckle. For those with open hearts and minds, the experience is an extraordinary one.”
The Scotsman on The Garden of Adrian

An exceptionally enriching piece of theatre.’ The Scotsman (The 14 Stations of the Life and History of Adrian Howells)

‘An act of extraordinary generosity.’ The Guardian (An Audience with Adrienne)

Adrian developed a show called ‘lifeguard’ in with both the National Theatre of Scotland and The Arches about humans and their relationships with water and swimming, which was performed in October 2012 for an intimate audience in the teaching pool of the Govanhill Baths. Nic Scrutton, Final Fling associate, created the soundscape.