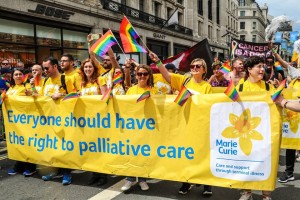 Marie Curie recently published an excellent report on end of life care for LGBT people (lesbian, gay, bisexual and transgender). Three cheers. It’s so welcome to find that our care matters too to major influencers like Marie Curie.

The report, Hiding Who I Am, shows that:

LGBT people are 3 times more likely to be single, less likely to have children and far more likely to be estranged from their families. Even though many LGBT people will have ‘alternative family structures’ – the friends that are their family – they may have less informal care support. Marie Curie are looking to carry out further research on how adaptable hospice and palliative care services are to alternative family structures.

The world has changed and many people who in past generations sadly lived in the closet are living out and proud. They will expect more from care at the end of life and certainly won’t be planning to climb back into the closet.

As a woman in a same sex relationship I know it can be irksome when people make assumptions and call me Mrs or ask what my husband does. I can live with that. It’s the social norm. It gets more irritating when it comes to weddings and old fashioned social occasions when organisers insist on doing ‘boy-girl’ seating arrangements, allowing heterosexual couples to sit together but not us.

You might think these wee things don’t matter much. It all matters. 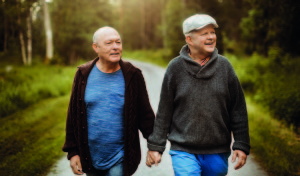 One of the big issues is anticipating discrimination. LGBT people may not even access palliative care services because they anticipate stigma or discrimination or think the service is not for them. “Anecdotal evidence leads us to conclude that LGBT people and their families don’t have their spiritual needs met either at the end of life,” the report says. Not surprising. The Pope may have announced that the Catholic church should apologise to gay people but that’s said still in the context of his contradictory judgement: “The Church teaches that homosexual tendencies are not sinful but homosexual acts are, and that homosexuals should try to be chaste.” Which kinda makes a nonsense of his well known “who are we to judge” statement.

Stonewall – the campaigning group for LGBT people – reports that 3 out of 5 older LGBT people are not confident that social care and support services will be able to understand and meet their needs.

I met a young person at the weekend, probably 15 or 16 years old. S/he’s not sure yet how s/he wants to identify – as a woman or man – and not sure whether s/he might be gay or straight. When I was 15 in the 70s I didn’t even get what homosexuality was, never mind feel I had a choice about my identify or sexual preference. How fantastic to be able to articulate that confusion and feel that choice is an option.

So, in this changing world, it’s important that training and development for health and social care staff catches up and discusses the issues to help staff move beyond making assumptions about people’s sexuality and gender identity.

LGBT people, just like everyone else, would be well advised to complete an Advance Decision that allows them to state some preferences for who should be involved in their care at the end and any other preferences they have, ‘in the event’.