Is death a taboo subject?

Every day, in small ways, Final Fling and others in the movement are challenging death as a taboo subject.

We and many others are active in the death movement, are working hard and collaborating to tackle the taboo, get some air into this subject and ultimately improve our experiences of death, dying, grief and bereavement.

We’re tackling the taboo daily. Part of this is by talking about death – in social media, in the media, to our neighbours. Part of it is our spirited and open approach. Part of it is organising events. We ran Scotland’s first Death Cafes – part of another global movement – to get death out of the shadows and into the community… ordinary folks in public halls and cafes having ordinary and extraordinary conversations.

Part of it is sharing ideas and tips about how we approach death, talk about death, support someone else’s death, manage ourselves around death, how we deal with loss and grief. We want our society to be more open to death and to talking about dying.

We produce information, run and promote events and provide resources to help engage. We ran a Design for Death symposium for professionals with Snook. We ran Scotland’s first Day of the Dead Festival.

We’re determined that up ahead, we’ll banish death as a taboo subject.

5 reasons we think the taboo is dying:

1) the taboo itself is dying as society progresses thinking: like other old taboos mentioned above – sex, politics, challenging authority.

3) the taboo is mostly in the medical world (where death may be considered a medical failure). Even the media are more open now. See news from July 2015 article about changing attitudes covering Final Fling and others in the Telegraph. 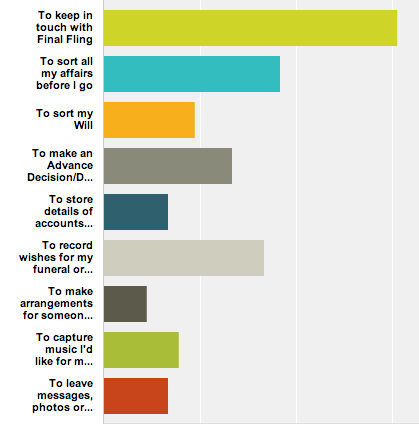