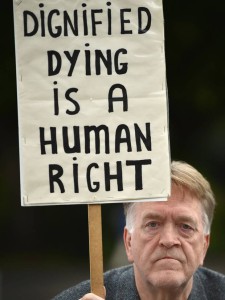 photo: via The Independent (Getty)

MSPs in the Scottish Parliament yesterday (27 May 2015) debated and rejected the Assisted Suicide Bill for Scotland by 82 votes to 36.

Shame. The Bill would have offered people with terminal illness control at the end – the ability to get the help of a doctor to end their life. Assisted dying is legal in Luxembourg, the Netherlands and Belgium as well as Switzerland and several US States.

Scottish government ministers were given a free vote “according to their conscience”. See how yours voted below. (Can’t wait for someone to do a bit of analysis by gender, area, age, party… I just don’t have the time!) 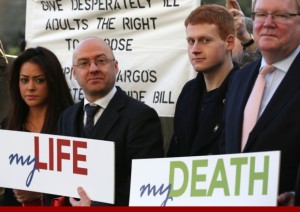 Patrick Harvie and campaigners at Holyrood (The Scotsman)

A Committee of Parliament recently discussed the Bill and felt it was flawed, opposing its principles. It was passed to the full Parliament for the vote. They’ve thrown our the Bill, so no change to law at the moment.

The politicians are way behind public view. Around 80% of people support this change.

The language doesn’t help. For example, Shona Robinson, Scottish health secretary is quoted as saying: “The government believes that the current law is clear, and it is not lawful to assist someone to commit suicide, and the government has no plans to change that.”

I’ve highlighted ‘commit suicide’. This is old language. Suicide is no longer a crime, so people ‘complete suicide’ – they’re not committing an offence. But just using this language immediately connects our thinking to crime.

We need to adopt the rest of the UK’s language – Assisted Dying. Much better.

Dignity in Dying’s A Matter of Facts publication helps clear up a lot of the misconceptions.

See a report from the BBC on who said what in the debate and the current legal position of Assisted Dying in the UK and beyond.

Part of the problem is that people in the medical profession seem to think death is a medical failure and so don’t want to be part of that. Catch on!

As Liberal Democrat MSP Liam McArthur said, growing numbers of people in Scotland have reached their decision to support this change based on direct experience of what has happened to a family member or good friend: “The right to life is not the same as a duty to live. This is about providing dignity, respect and choice at the end of life.”

Campaigners My Life, My Death, My Choice had gathered outside the Scottish Parliament to urge MSPs to support the Bill. Contact them to support the campaign.

See a report on the debate.

FOR the Assisted Suicide Bill:

Against the Assisted Suicide Bill